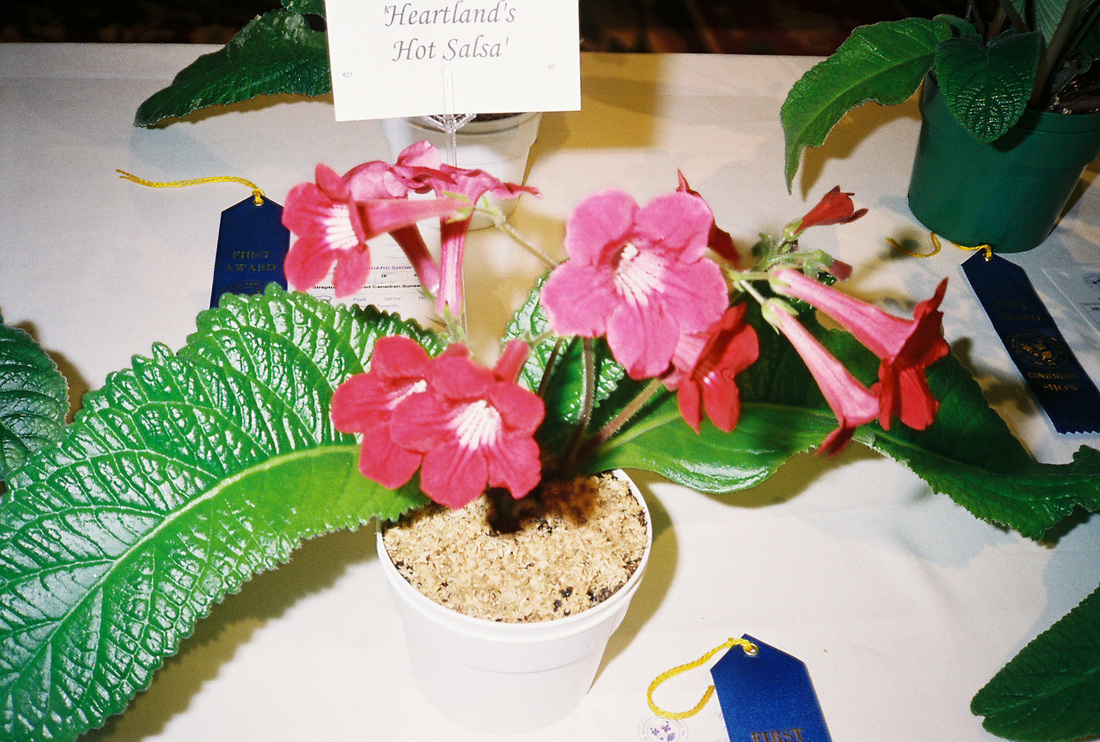 An example of a hybrid Streptocarpus. FFI, see the bottom of the page.

About Gesneriads in General

Their ability to thrive and bloom in average home conditions, and their size and growth habits, make them easy to live with. They are often available through garden centers, florists, grocers, and home improvement stores. The best-known kinds in the USA include African Violets (Saintpaulia), Florist Gloxinias (Sinningia), Goldfish Plants AKA Candy Corn Plants (Nematanthus, formerly Hypocyrta), Lipstick Vines (Aeschynanthus), Flame Violets (Episcia), and Cape Primrose AKA Swedish Gloxinia (Streptocarpus) (the plant shown above). Chinese Violets / Asian Violets / Vietnamese Violets (Primulina, formerly Chirita) (see the image on our home page) are popular as houseplants in China and Southeast Asia, and they are becoming increasingly available on this side of the Pacific.

Although the geographical portions of the common names are mostly accurate (Streptocarpus became popular as a gift/house plant in Sweden, so is occasionally described as Swedish Gloxinia), the Violet term refers to a mild resemblance to woodland plants rather than a botanical relationship.

Sizes range from true miniatures suitable for fairy, bowl, and dish gardens to impressive specimens with large leaves or cascading stems. Flowers are often bell, slipper, or star shaped and come in a wide range of colors from delicate pastels through bold hues to deep shades.

Typical care for these plants includes suitable light (some need direct sun, while many others get along with mild light levels), watering about once a week, some cosmetic work (trimming for shape/removing spent flowers or leaves) and very occasional repotting. Fertilizers can be applied as soluble powder or liquid with their normal water, or as slow-release pellets once or twice a year.

Gesneriads are Generally Regarded As Safe with respect to infants and other vulnerable individuals. They are not a source of irritating pollen, contact allergens, or unpleasant aromas, although few are fragrant. However, they are not a human food in any culture we know of. Another point is that since they are only ever grown and presented as ornamentals, they may have been treated with various chemicals which could render them problematic. As a cautious person would do with any plant, be careful of who or what touches them, and how, where, and when.

More information: The internet has many images and articles; search on any of the names given here. Public libraries and bookstores have books on tropical plants: a few specifically about this family; many more about house plants will have chapters or other divisions about popular types of Gesneriads. Some garden centers offer plant care data sheets. Or, of course, ask us!

About the Family Name

The name honors a 16th Century naturalist, scholar, physician, and author, Conrad (or Konrad) Gesner (or Gessner) of Switzerland (1516–1563). Although his botanical studies did not include any of the plants later included in the eponymous family, he was one of the earliest users and advocates of direct observation, sampling, recording, and classifying as the basis of factual understanding of the physical world. Thus, Gesner became one of the leaders of the scientific revolution in Europe. His lifelong love of plants and gardens is commemorated in the Gesner Herbal Garden in the Old Botanic Garden in Zurich, Switzerland. His documentation of over 1000 plant species was published as Historia Plantarum in 1750.


More about Streptocarpus: The literal meaning of the botanical generic name is “twisted seed pod”; it has occasionally been described as a “Swedish Gloxinia”. Streps have been used as garden annuals in recent years; some nurseries make them available during the growing season. They may also appear as gift plants in Floral stores and departments.